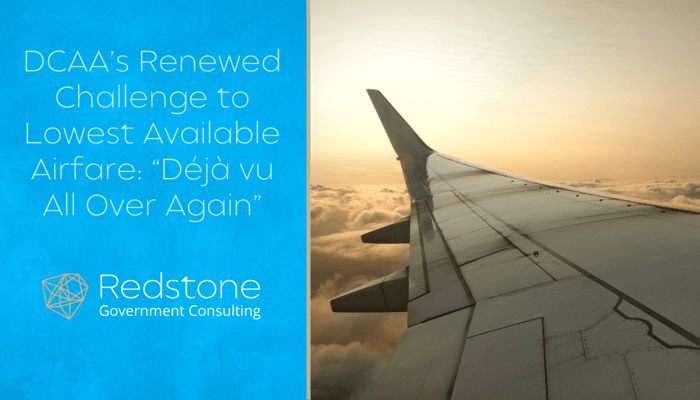 A recent DCAA audit reintroduced (or resurrected) a DCAA MRD (Memorandum for Regional Directors) dated March 22, 2010 which provided auditors with DCAA’s liberal interpretation of a January 2010 change to FAR 31.205-46(b) limiting allowable airfare to “lowest priced airfare available to the contractor.”

Briefly, the 2010 FAR change eliminated references to “standard coach or equivalent” (that terminology no longer applied) and more importantly to compel contractors to claim amounts based upon contractor-specific travel agreements with airlines and/or travel agencies instead of ticket prices available to the general public.   This change addressed contractors who booked first or business class airfare, comparing that to “a walk-up or same-day coach class ticket” as the baseline for limiting the allowable airfare.  In many cases, walk-up coach class was more than the actual first-class ticket price, the latter based upon a discounted price available to the contractor through a specific agreement (not available to the public).

Although the 2010 FAR change was clearly focused on one topic--a contractor’s consistent use of its specific airfare pricing agreements--DCAA’s 2010 MRD introduced other cost allowability considerations which were not in FAR 31.205-46, nor in any of the promulgation public comments and FAR Council responses.  Believe it or not, DCAA freely reinterpreted that contractual clause in order to create more opportunities for DCAA auditors to question contractor travel (in this case, airfare costs).

As we reported in a March 2010 newsletter, DCAA’s MRD would introduce new and unintended challenges as long as no one told DCAA to rescind its MRD.   In fact, for the first few years after the FAR change, contractors encountered DCAA expectations and assertions which were embellishments of the FAR and (because of this) unsustainable when presented to an ACO for issue resolution.   DCAA’s non-regulatory assertions included:

At some point, DCAA auditors also introduced an after-the-fact test based upon comparisons of contractor airfare to either the DTS (Defense Travel Service) or an FAA historical ticket prices database (in neither case did any of these comparisons represent airfare prices based upon contractor specific agreements).

DCAA’s lack of success with this issue (almost never sustained by an ACO) appeared to have caused the issue to fade into the sunset, but very recently new auditors with old ideas have triggered a Déjà vu all over again (quote attributed to Yogi Berra).   In this recent case, the auditors were focused on travel charged direct to Government cost type contracts, and the audit inquiries were obviously concerned with the dates of travel compared to the date that a ticket was purchased (even though all tickets were purchased using a travel agency and a specific agreement between the airline(s) and the contractor).   After exhaustive and ever-expanding inquiries, the DCAA auditors identified a number of trips for which the contractor’s explanations fell short of convincing DCAA that the contractor used “advance planning strategies” to yield lower ticket prices.   DCAA then used other “published sources” for historical airfare (city to city data) to determine reasonable amounts for airfare and ultimately questioned actual airfare exceeding DCAA’s computation of a reasonable amount.   In this case, the audit also involved statistical sampling; hence, cost allowability issues on a few travel/airfare transactions was extrapolated to a universe of all direct travel/airfare costs.

Although this issue is only now evolving, it is a reminder that DCAA audits and DCAA auditors can take issue with any contractor policies and costs claimed, in spite of the fact that previous audits took no issue and nothing has changed in either the regulations or the contractor policies.   It is analogous to having a new sheriff in town (i.e. reinterpreting existing regulations and not the least bit concerned with his or her predecessor’s opinions).   Unfortunately, a contractor can do little or nothing to prevent an auditor from introducing (or in this case re-introducing) audit assertions which are based upon criteria which is derived from a DCAA internal policy (MRD).

However, a contractor can mitigate risk by consistently following policies and procedures that have withstood the test of time (i.e. previous audits) coupled with the fact that the underlying regulation (FAR 31.205-46(b) has not changed since January 2010.    Lastly, a contractor should defend its practices, its claimed costs, by preparing a rebuttal which explains its policies and procedures which reasonably ensure the allowability of claimed costs consistent with the regulations.   Secondarily, contractors should address the flaws in any DCAA assertions, particularly those involve embellishing the FAR.   Audits and audit assertions should be based upon the “written word” and not DCAA’s preferred version(s) of FAR, and one should never forget that DCAA may represent the new sheriff in town, but DCAA is not the Judge; ACO’s have the authority to accept or reject DCAA’s advisory opinion.

Redstone Government Consulting has a number of consultants who are ready, willing and able to assist on issues involving DCAA audits including contractor actions before, during and after the audit.