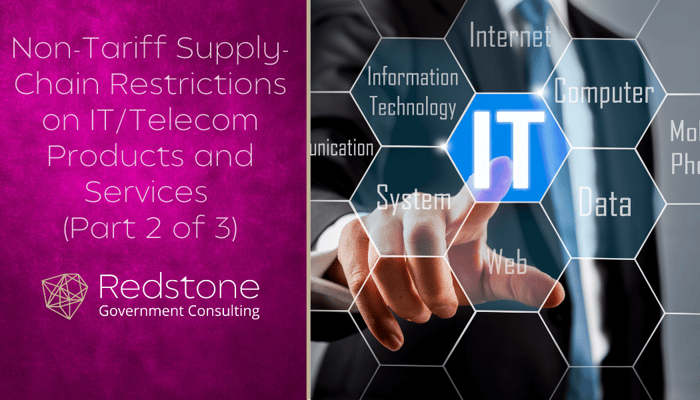 There have been several recent developments in U.S. law, relating to non-tariff restrictions on foreign-origin information technology and telecommunications equipment, with a focus on Chinese-origin products. This is the second installment of a three-part series on this topic.

Section 889 of the National Defense Authorization act for 2019 (the “NDAA”) placed new restrictions on all U.S. Government procurements of certain telecommunication equipment, systems, and services (“Systems”). Effective August 13, 2019, the U.S. Department of Defense (“DoD”), General Services Administration (“GSA”), and National Aeronautics and Space Administration (“NASA” and, collectively with DoD and GSA, the “Agencies”) issued an interim rule that implements NDAA Section 889(a)(1)(A) (the “Interim Rule”), by adding Subpart 4.21 to the Federal Acquisition Regulation (the “FAR”) and creating FAR Clauses 52.204-24 and 52.204-25.

While the Interim Rule is in effect, contractors are invited to submit public comments on or before October 15, 2019.

What These Rules Apply to:

At a high level, the Interim Rule prohibits contractors from providing any equipment, system, or service that uses “covered telecommunications equipment or services” as a “substantial or essential component” of any system, or as “critical technology” as part of any system, unless an exception or a waiver applies. As discussed below, this essentially places restrictions on a contractor’s use/inclusion of the products of Chinese telecom giants, Huawei and ZTE, as well as other named Chinese entities.

(1) Telecommunications equipment produced by Huawei Technologies Company or ZTE Corporation (or any subsidiary or affiliate of such entities);

(3) Telecommunications or video surveillance services provided by such entities or using such equipment; or

(4) Telecommunications or video surveillance equipment or services produced or provided by an entity that the Secretary of Defense, in consultation with the Director of National Intelligence or the Director of the Federal Bureau of Investigation, reasonably believes to be an entity owned or controlled by, or otherwise connected to, the government of a covered foreign country.

Also note that paragraph (4) references “the government of a covered foreign country.” In this regard, “covered foreign country” is defined to mean “The People’s Republic of China.” Thus, paragraph (4) provides broad discretion for the Secretary of Defense to designate additional entities that are “connected” in some way to the Chinese government. Presumably, however, if the Secretary of Defense were to designate additional entities under paragraph (4), it would publish the name of each entity and the scope of products in a separate notice. In any case, the rule only impacts Systems that include equipment or services, provided by particular entities. So, if the subject System does not include any of these equipment or services, the prohibition does not apply.

“Critical technology” has the same meaning as included in the Foreign Investment Risk Review Modernization Act of 2018 (“FIRRMA”). More specifically, it means:

(1) Defense articles or defense services included on the United States Munitions List set forth in the International Traffic in Arms Regulations under subchapter M of chapter I of title 22, Code of Federal Regulations;

(2) Items included on the Commerce Control List set forth in Supplement No. 1 to part 774 of the Export Administration Regulations under subchapter C of chapter VII of title 15, Code of Federal Regulations, and controlled—

(i) Pursuant to multilateral regimes, including for reasons relating to national security, chemical and biological weapons proliferation, nuclear nonproliferation, or missile technology; or

(ii) For reasons relating to regional stability or surreptitious listening;

(4) Nuclear facilities, equipment, and material covered by part 110 of title 10, Code of Federal Regulations (relating to export and import of nuclear equipment and material);

In the Interim Rule, the Agencies acknowledged that FIRRMA’s definition extends beyond the scope of telecommunications—e.g., it includes certain “agents and toxins.” However, the Agencies explained in the Interim Rule that this over-breadth will not cause undue burden on contractors, because the rules still apply only to Systems that include “covered telecommunications equipment or services.”

Paragraph (1) includes all items subject to the ITAR. Paragraph (2) includes most items included on the EAR’s Commerce Control List (the “CCL”). Note, however, that paragraph (2) does not include EAR-controlled items classified as EAR99 or CCL-listed items that are controlled only for anti-terrorism reasons. For example, items controlled by the CCL under ECCN 5A991 (which controls many telecom items) would not qualify as “critical technology” because ECCN 5A991 is controlled only for anti-terrorism reasons. In any case, suffice it to say that contractors will need to determine the U.S. export classification of any “covered telecommunications equipment or services” that the contractor will include in a System, in order to determine whether those items are “critical technology” and, thus, subject to the prohibition.

Note that paragraph (6) includes “emerging and foundational technologies,” which are being defined through separate rulemakings.

If the System will use “covered telecommunications equipment or services” as either a “substantial or essential component” or as “critical technology,” then contractors should consider the exclusions provided in FAR Clause 52.204-25, paragraph (c), which says:

“This clause does not prohibit contractors from providing—

(1) A service that connects to the facilities of a third-party, such as backhaul, roaming, or interconnection arrangements; or

(2) Telecommunications equipment that cannot route or redirect user data traffic or permit visibility into any user data or packets that such equipment transmits or otherwise handles.”

No additional clarification is provided on the scope of these exclusions. For example, it is unclear whether the exclusion at paragraph (2) would apply if the subject telecommunications equipment “routes” user data traffic as part of its normal function, even if the equipment does not “redirect” or “permit visibility” into user data traffic.

Fourth, if the subject System does not qualify for either of the exclusions, then a formal waiver would have to be obtained. The head of the agency can grant a waiver, though there is a Congressional reporting requirement. In addition, the Director of National Intelligence can grant a waiver.

Ultimately, if the subject System uses “covered telecommunications equipment or services” as a “substantial or essential component” of any system, or as “critical technology” as part of any system, and if no exception applies and no waiver is obtained, then the agency is prohibited from procuring the System.

FAR Clause 52.204-25 is the basic clause and includes all the key definitions. It prohibits agencies from procuring Systems that that use “covered telecommunications equipment or services” as a “substantial or essential component” of any system, or as “critical technology” as part of any system, unless an exception or a waiver applies. It also prohibits the contractor from providing any such Systems, unless an exception or a waiver applies.