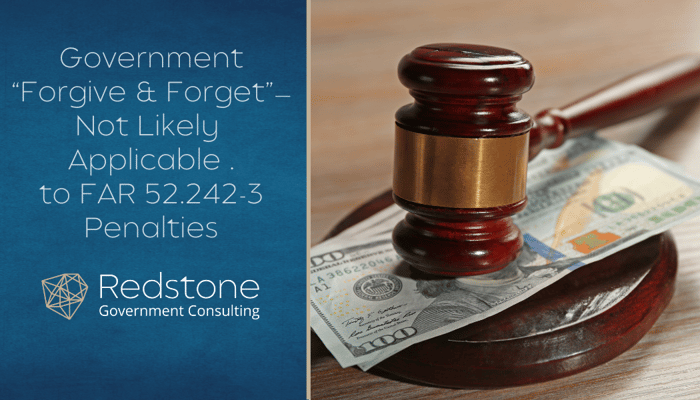 A recent ASBCA decision (No 61583) confirms that Government benevolence does not extend to penalties associated with a contractor’s final indirect cost rate proposal (FICRP) which included expressly unallowable indirect costs. In one case, the issue was unallowable legal costs incurred as a result of the US Department of Justice (DOJ) investigation of the contractor, which was triggered by information suggesting that the contractor claimed indirect salaries for an individual whose services were as the housekeeper for the owners of the company and thus unallowable as costs allowable to Government contracts.

The Story of Unallowable Legal Costs

Over a series of years, the contractor’s FICRPs (2010-2013) claimed the legal costs which the Government believed was in non-compliance with FAR 31.205-47(b); thus, expressly unallowable subject to FAR 52.242-3 penalties ($1 penalty for every $1 of expressly unallowable costs). The amount at issue was $53,614; implicating that a like amount of unallowable legal costs had been allocated in 2012-2013 to contracts with FAR 52.242-3.   For reasons never explained in the published decision, the Government ACO did grant a waiver from the penalties for 2010-2011 (the information is sketchy at best given that the Government did not have an audit report for 2010-2011).

Based upon other published decisions involving FAR 52.242-3, ASBCA No. 61853 comes as no surprise because most decisions have favored the Government interpretations and actions involving the assessment of the penalty.

Previous decisions (almost all involving Raytheon) have established the following:

One other point of reference, several IG (Inspector General) reports over the years have been critical of Government failures to enforce the penalty clause (in most cases, failure in the context of taking no action and not in the context of issuing an unsupported waiver).   When one considers everything on the table, including the history of and wording in FAR 52.242-3, the published decisions, and continuing IG interests, it simply reinforces the need to avoid claiming expressly unallowable costs in a final indirect cost rate proposal (or even worse, in a continuing series of FICRPs).  Waivers, if any, are more likely accidental than intentional and a contractor simply cannot assume that the Government’s benevolence will result in easily obtainable waivers (from the penalty).

As clearly stated in ASBCA No. 61583, it is the contractor’s responsibility to comply with the various FAR clauses (52.216-7 which invokes 52.242-3); thus, avoid claiming expressly unallowable indirect costs. This maybe a “latent defect” for hundreds of contractors whose FICRPs have gone unaudited for years (given a “free-pass” attributable to DCAA’s Low Risk Universe policy for eliminating the incurred cost backlog). In other words, the lack of incurred cost audits can have unintended consequences if a contractor becomes complacent and fails to keep up sound internal controls, due diligence and an occasional third-party independent assessment of contract compliance.

If you are looking for support in preparing proposals or need guidance with auditing or other government investigations surrounding your contracts, let the experts at Redstone Government Consulting help you. Our team members have years of experience in representing contractors of all sizes, which is combined with knowledge of working with Government agencies in all types of situations. From training to consulting, Redstone representatives can lead your team in developing contracts and accounting systems which fit government regulations and specific contractor needs.