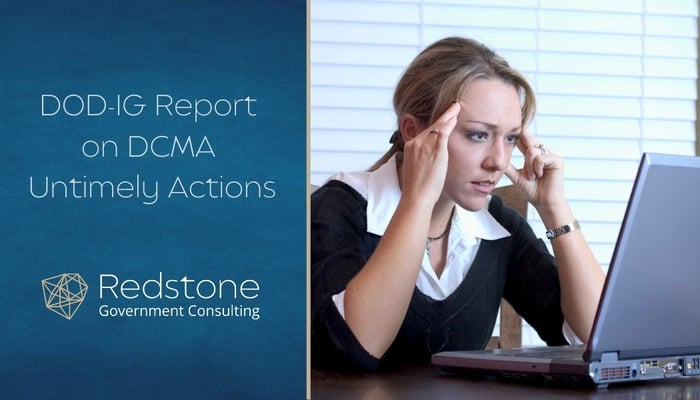 In its recent report (DODIG 2015-139), the DOD-IG (Inspector General) found that DCMA Contracting Officers failed to comply with DFARS timing requirements related to contractor business systems (DFARS 215,407-5-70 and DFARS 252.242-7005. In this case, the IG evaluated actions (or more accurately inactions) on 18 DCAA audit reports related to contractor estimating systems which are subject to the criteria in DFARS 252.215-7002. The DFARS Business Systems rule includes no time frames concerning government audits of contractor systems; however, once a government audit report is (finally) issued, DFARS has the following time-requirements (“requirements” used loosely because due dates applicable to the government are routinely ignored as evidenced in the IG report):

Although the IG report reflects negatively on DCMA contracting officers, of far more importance to government contractors are the DCMA responses to:

Although prior DOD-IG reports have noted similar findings, those reports have been focused on a single contractor (stemming from a hotline allegation). The more recent IG report is far more comprehensive and it also involves a new DCMA Director who has committed to adherence to the requirements (qualified for complex issues which could extend the time-lines).   Thus, one should assume that there will be far more actions by DCMA contracting officers; however, no one should assume that every final action will involve withholds. There will be more “determinations”, but it remains to be seen if any of DCAA’s reported “significant deficiencies” will survive robust contractor rebuttals (not to mention the fact that DCAA reports anything and everything, seemingly disregarding concepts of materiality). Now more than ever, it is incumbent on defense contractors to self-assess for compliance (before a government audit or review) and to closely track ongoing audits for implications of system deficiencies (i.e. attend to audit or reviewer statements suggesting business system issues such as unsupported costs included in a DCAA audit of a contractor bid proposal).   As with the sports cliché, the best defense is a proactive offense, in this case a self-assessment which yields objective conclusions and equally important a mapping from business systems criteria to a contractors policies, procedures and documented practices which demonstrate compliance.