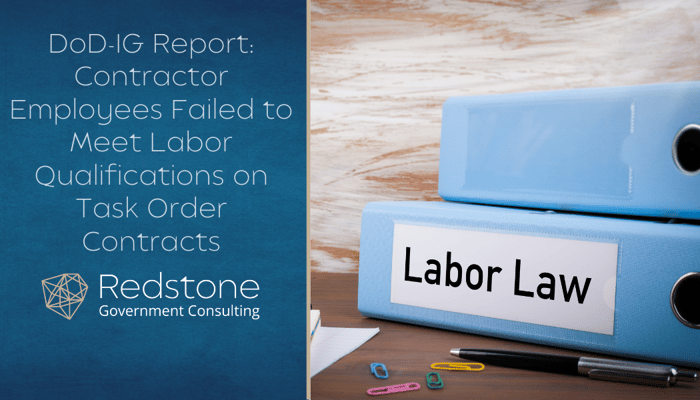 The IG Report and Labor Qualifications

For contractors with task order (T&M) contracts audited by DCAA, the IG report merely confirms that employee labor qualifications vis-à-vis contractual education and experience requirements are a high-risk category if/when DCAA performs an incurred cost audit.   Unlike the DoD-IG which utilized interviews/inquiry to supplement existing documentation, DCAA auditors solely rely on existing contractor documentation in comparing specific employees billed on T&M invoices to the contractual labor qualifications.  In the context of DCAA audits, recent experience continues to illustrate that if the existing documentation (e.g. personnel files or employee resumes) is insufficient, the DCAA auditor will disallow the entire amount (hours billed at the applied/contract schedule rate), even if further inquiry might establish that the employee met the labor qualifications. In some cases, the issue isn’t the lack of contractor documentation, but it is the subjectivity embedded within the stated labor qualifications (i.e. years of “qualified” experience or a college degree in a stated discipline or an “equivalent” discipline).

Although DCAA audit policy requires the auditor to coordinate with the contract CO (Contracting Officer) before reaching any final conclusions that labor hours did not meet contractual qualifications, experience suggests that auditors are likely to report the questioned costs and then coordinate with the contracting officer.  And one recent (highly frustrating) experience involved a DCAA auditor who questioned a number of labor hours only to hand-it off to a CO who was unwilling to consider any (labor qualifications) interpretation other than the DCAA auditor’s interpretation (the CO had recently left DCAA and was quite comfortable in merely deferring to DCAA as if the auditor has the skills to evaluate employee labor qualifications or the final regulatory authority to determine contractor employee qualifications).

The DoD-IG report, coupled with DCAA’s audit strategies involving highly subjective and somewhat biased audit interpretations, is cause for alarm for contractors with T&M (task order) contracts. Although thousands of contractors have been deemed low risk by DCAA (thus thousands of indirect cost rate proposals have been accepted without audit), those actions only yield final indirect cost rates (which, with few exceptions, cannot be subsequently challenged or changed), and contract direct costs (including labor hours invoiced on T&M contracts) are only final with the submission of, and Government acceptance of, a final voucher/invoice. Whether or not DCAA will re-visit earlier years (with final indirect rates) remains to be seen and it is most likely a function of DCAA resources and priorities.

Considering the DoD-IG report and the potential for DCAA audits of open T&M contracts, a contractor’s best defense is to submit final invoices as soon as possible (shortly after a task order is physically complete assuming that final indirect rates have been established).   Prospectively, contractors should ensure that their policies and procedures “map” employees to labor categories/contractual qualifications, that the mapping is documented//retained, and that any new employees are similarly mapped before working on a task order contract.   Unfortunately, this is not a static process, employee resumes and/or personnel files must be updated to document additional experience or education (in general, but more critically for contractor employees who work on task order T&M contracts).

In mapping employees to contractual categories and qualifications, contractors should read the DoD-IG report to further understand where contractor assumptions (e.g. measuring years of experience) were determined to be overstated by the IG (who did consult with the GSA).  One recurring example is for employees with military experience involving reserve and active duty (merely being in the reserves does not count, at least not for the express purpose of measuring years of relevant experience).

Although it was not directly related to the objective of the DoD-IG review, their report also provided some useful information concerning the value of task order contracts versus the amounts truly awarded under these types of contracts.   In this case, over a span of four years and 540 task orders under OASIS, the estimated ceiling value was $7.1 billion, but the actual expenditures were $950.5 million. There might ultimately be additional expenditures, but the gap between ceiling and actual expenditures is a reminder that no contractor should assume that it will be awarded task orders equal to (or even approaching) the ceiling on task order contracts (most often IDIQ or Indefinite Delivery/Indefinite Quantity).  Look to the experts at Redstone Government Consulting to help you ensure your team is well-versed in contractual labor qualifications.