DCAA Audit Policy on Materiality: Are We There Yet? 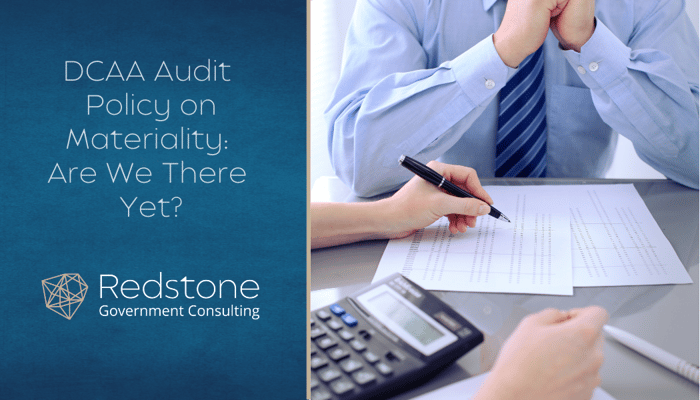 DCAA’s July 19th AGM or Audit Guidance Memorandum (19-PAS-003(R)) implemented the Section 803 requirement of the 2018 NDAA (National Defense Authorization Act) that DoD/DCAA adopts commercially accepted standards of materiality (in application) to incurred cost audits.  This requirement is in the broader context of continuing Congressional interest in the incurred cost backlog and performance of incurred cost audits.   More specifically, the subsection which requires commercially accepted standards of materiality is designed to improve the efficiency of the contract auditing process.

The 2018 NDAA also defines “numeric materiality standard” as the dollar amount of misstatements, including omissions, contained in an incurred cost audit that would be material if the misstatements, individually or in the aggregate, could reasonably be expected to influence the economic decisions of the Government, made on the basis of the incurred cost audit.   For what it is worth, this wording is a derivation of the materiality standards used in financial statement audits which focus on the economic decisions of investors versus those of the Government.

Unfortunately, this definition is highly conceptual (esoteric and/or academic) and reminiscent of the DFARS Business System Rule, which defines a significant deficiency as a “shortcoming in the system that materially affects the ability of officials of the DoD to rely on the information”.   Contractors subject to the DFARS business system definition of a significant weakness continue to deal with variations in Government interpretations which are inevitable when individuals convert “concepts” into “practical application”.

The good news, DCAA’s AGM does include formulas which will be applied in terms of computing an amount considered “material” by relating the amount of the misstatement (i.e. unallowable cost) to the total dollars subject to audit.  DCAA’s AGM provides an example for an audit of $1,000,000 (auditable dollars--incurred costs on auditable contracts, such as cost-type and T&M)) for which the formula yields a materiality threshold of $28,117. By implication, in planning and risk assessing this audit, an auditor should only audit incurred direct and/or indirect costs if the auditor believes that the aggregate misstated (unallowable) costs is at least $28,117.  Although the numeric materiality concept focuses on initially scoping the audit, it would logically apply if/when the auditor performs the audit and determines if misstated costs rise to the predetermined amount.

Using this one example, one would assume that DCAA would not perform an audit and/or not audit specific accounts if the risk assessment concluded that there is low probability of uncovering at least $28,117 in unallowable costs. Taking this one step further, the audit scope might include detail testing of certain “high risk” accounts based upon the risk of aggregate unallowable costs exceeding $28,117 and not performing any auditing of the remaining “low risk” accounts (which is nothing new, only now with a specific materiality differentiator).

We (and the contractor community) are all in favor of any policy which might help define materiality in order to avoid costly “in the weeds” audits.  Unfortunately, neither Congress (through the NDAA), nor DCAA (through its AGM and its internal training) can eliminate inconsistencies attributed to another concept, “professional judgment”.  As noted by DCAA, this should include both quantitative and qualitative factors, but even the quantitative factors are subject to reduction based upon professional judgment (in this context, a “reduction” would effectively lower the computed materiality threshold by as much as 80 percent).

At least one other consideration implicating reductions in the materiality threshold (based upon professional judgment) is the potential for penalties for expressly unallowable costs (FAR 52.242-3), which only applies to indirect costs for which the only mandatory penalty waiver is when the aggregate contractor misstated (unallowable) amount in an indirect cost proposal is $10,000 or less. Hence, with the dollar for dollar penalty, misstated (and expressly unallowable) costs of $25,000 becomes $25,000 + $25,000.  Unlike commercial (and now DCAA) materiality thresholds which have an inverse relation to the total audited dollars, the current penalties clause has a fixed waiver value regardless of the total value of a particular incurred cost proposal.

In answering the question, “Are we there yet” in terms of materiality concepts which will be consistently applied, the answer is yes, but only in the context of the concept.  The interpretations, thus the actual dollar values used for audit planning (“scoping”), will still be heavily dependent upon the professional judgment of an auditor or audit team.  Add to this the fact that none of this is incorporated into any contract clause; hence, contractors will (still) not have any contractual basis to challenge an “over-scoped” audit.

Although tangential to the numeric materiality concepts, we are also (sort of) anxiously awaiting revisions to DCAA’s Low Risk Universe, a concept which has resulted in a final rate agreement letter for thousands of unaudited indirect cost rate proposals.  Beyond any DCAA revisions to its low risk universe policy, the lack of any audit experience by most low risk contractors will not help auditors, who are now trying to apply quantitative and qualitative planning factors to a large number of “unknown entities”.

To end on a positive note, DCAA has implemented the “commercial materiality concepts” well in advance of the Congressionally mandated due date (October 1, 2020).  With training and experience though trial and error, DCAA might achieve reasonable consistency by October 1, 2020.  The operative word is “might”.