When is Simple Negligence “Gross Negligence” And Why Should This Concern Your Company? 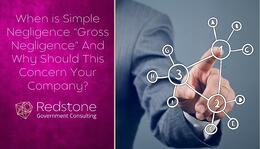 Subsequently, KBR received a proposal from the subcontractor that actually tripled their initial cost estimate instead of doubling to meet the Army’s new requirements for the number of troops requiring dining services.  According to the Court, KBR knew of the error in its cost calculation formula, yet went ahead and used the flawed cost range to evaluate the reasonableness of the subcontractor’s proposal.

The Federal Circuit ruled that KBR’s negligence in using a known flawed cost formula in evaluating the subcontractor’s proposed costs and the subsequently inflated billed costs “arose out of grossly negligent mistakes.” What does this ruling mean to your company? That known simple mathematical errors left uncorrected maybe considered “Gross Negligence” and result in significant financial risk to your company. Therefore it is imperative that companies take the necessary steps to ensure that its cost proposal calculations are free of any and all mathematical errors.