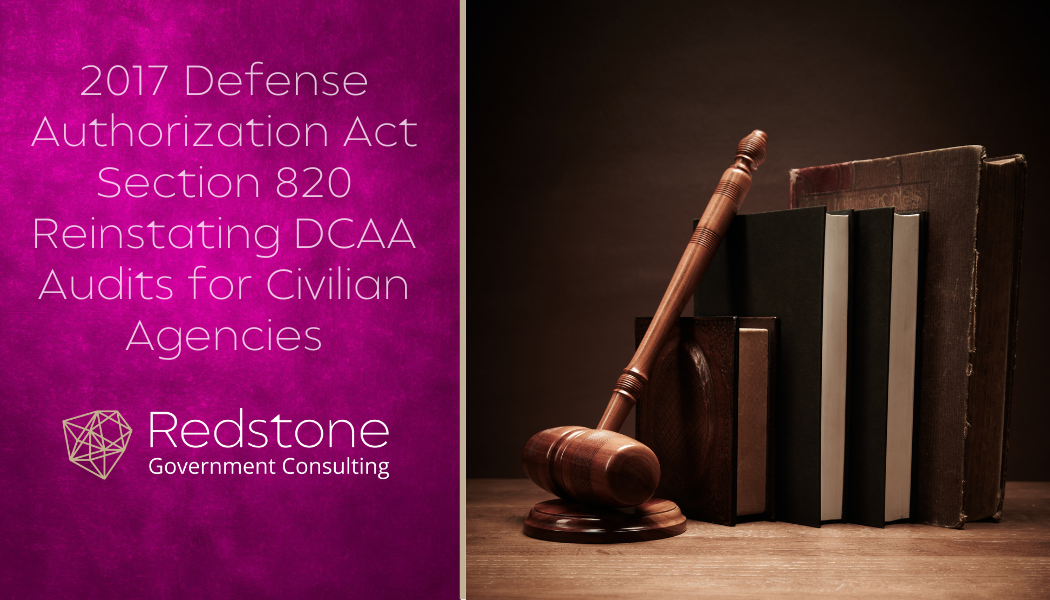 Although the 2017 NDAA (National Defense Authorization Act) is a work in progress, as it stands, it includes Section 820 which would repeal subsections (a) and (d) of Section 893 of the 2016 NDAA (section 893 was discussed in a previous blog dated January 13, 2016). If portions of Section 893 are repealed, DCAA would have the renewed ability to perform audits for non-Defense Agencies without any reduction in DOD funding.

In all likelihood, DCAA authored Section 820 and also provides the rationale and support for its proposal and the budgetary impact. In terms of rationale, DCAA (section 820 as drafted) asserts that the lack of civilian agency audits (which had been reimbursable; hence, DCAA funding in addition to DOD funding) equates to a reduction of 400 staff/audit years; hence, Section 893 is working against its stated goal of reducing the incurred cost audit backlog.   In the narrow context of staffing, DCAA is conceptually correct although there is no way to verify the accuracy of the 400 staff years ($50 million in reimbursable budgets). All else being equal, fewer staff years equals fewer audits (incurred cost backlog or other audits).

In an attempt to reinforce its Section 820 proposal, DCAA introduces other issues including the fact that Section 893 will cause contractors (with contracts with multiple agencies) to be subjected to duplicative audits because DCAA is no longer able to audit the direct costs of non-defense agencies.   As it relates to indirect costs (to establish final indirect rates under FAR 42.705) DCAA has issued an audit policy (16-PPD-001) which states that DCAA can audit the indirect costs (which are common to all contracts, DOD and civilian agency), but cannot audit the direct contract costs (civilian agency).   In fact, DCAA’s audit policy “splits hairs” in terms of taking the position that DCAA can still perform non-audit financial advisory services for civilian agencies (because Section 893 specifically referred to audit services).

Beyond the “duplicative audits” assertion, DCAA (Section 820) goes one step further and asserts that section 893 introduced inefficiencies (and costs) into the acquisition process that would not exist if DCAA were permitted to perform a single audit.   In terms of budgetary impact, Section 820 includes a chart, “Increase in Resource Requirements” for FY2017-2021 which concludes that Section 893 will cost approximately $20 million annually.   Per Section 820, “if 820 is not enacted, the non-DOD agencies will be required to contract with Independent Public Accounting (IPAs) to perform the work in lieu of DCAA. We estimate that this will cost as much as $20 million more (annually) than if DCAA was to perform the work.”

To the extent DCAA (Section 820) provides summary level data, it cannot be determined what assumptions were used to estimate the budgetary impact; however, it is otherwise unsupported and obviously self-serving for DCAA to assert that IPA audits will cost more than DCAA audits.   Further, DCAA is in error in asserting that there will be any duplicative auditing caused by a continuation of Section 893.   The point of reference is The Single Audit Act (A-133) for which a single audit report is ultimately issued; however, the audit participants are not necessarily a single audit agency or IPA.   The “single audits” are planned and managed by the issuing agency or IPA; however, components of the audit are performed by a supporting agency or IPA including those A-133 “single audits” which have involved DCAA audits as one of the supporting participants.   The point, a well-planned and collaborative “single audit” is not necessarily performed by a single entity nor is a multiple participant audit inefficient. Although DCAA (Section 820) never alludes to it, DCAA has rarely (if ever) been a willing participant in joint audits particularly when DCAA is not the lead auditor. In spite of the fact that numerous IPAs and other audit agencies have been able to efficiently work through joint audits, DCAA wants no part of it.

Rather than debate the issue (relying on conceptual arguments and unsupported budgetary assumptions), DOD, Civilian Agencies, and ultimately Congress would be best served with actual data; specifically, head-to-head comparisons of DCAA audits with IPA audits (by implication, removing the current ban on A-76 public-private competitions).   It is now well established that contract audits are commercial activities and more significantly competitive commercial activities which include a number of qualified small businesses.   As stated the OMB Circular No. A-76, “To ensure that the American people receive maximum value for their tax dollars, commercial activities should be subject to the forces of competition.” If contract audits are commercial activities, let them (including DCAA) compete.   It is particularly noteworthy that A-76 and DCAA are nominally focused on providing maximum value to the taxpayer; however, we will never know if DCAA provides maximum value as long as DCAA is protected from competition.