What Could Defense Production Act Mean? 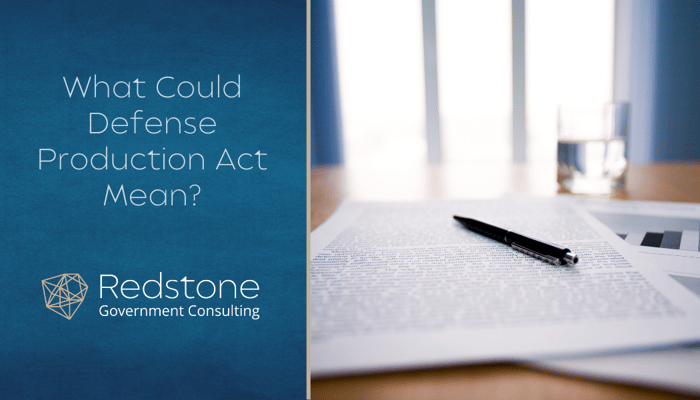 The President has announced he has invoked the 1950 Defense Production Act (DPA).  This act provides the Government with the ability to direct businesses to accept contracts and increase the production of necessary goods and services.  The act has been used numerous times since 1950 to support emergencies, including natural disasters and the war on terrorism.  The current fight with COVID-19 has necessitated it once again.  A July 28, 2014, Congressional Research Service paper titled “The Defense Production Act of 1950: History, Authorities, and Reauthorization” summarized the current act to include:

While the act is mostly thought of as being used by the Department of Defense, it can and has been used by many different executive agencies.  In the current situation, we are likely to see Health and Human Services use the act to help direct private industry in the areas of healthcare and medical supplies.

For most companies (contractors in Government Contracting terminology), being directed to take on additional contracts and prioritize Government orders to support a national emergency is not an issue, and most see it as a patriotic duty.  However, this additional Government revenue can come with visitors these companies may not have seen before – Government Auditors.  Defense Contract Audit Agency (DCAA) is the Government’s auditor of choice, in most cases.  For example, historical Government audit activity resulting from hurricane relief included DCAA test company claims to determine how many square feet of tarping the company applied to roof damaged homes.

Another area that draws audit attention is the use of subcontractors. Many companies take on the support of subcontractors and contract employees during work surges, as a result of the increased effort these additional Government orders can create. Government contracts have numerous terms and conditions related to subcontracting that can catch a company off guard even in a contract, the Government terms as “Commercial.”

If you are an existing government contractor, now is a great time to take inventory of your current contracts and make sure that you can readily identify the DPAS rating of all contracts.  Ratings for contracts fall into two categories DO and DX.  DO orders have equal priority status with each other and take preference over unrated orders.  DX rated orders have equal status to each other and take preference over DO rated orders and unrated orders.  DX rated orders are of the highest national industrial priority, and DO are considered critical to national defense.

Schedule I to Part 700 – Approved Programs And Delegate Agencies illustrates the programs listed for national defense, and these are a key indicator when reviewing your contracts. The program identification (PI) symbols are alphanumeric and follow the DX or DO (e.g. DX-A1). The PIs most likely to be seen activated are those classed as “other defense” or “homeland security.” These PIs begin with either an “H” or an “N.” Your review of your previously accepted rated orders should place emphasis on these categories.

Make certain that you are conducting meetings with your production scheduling and operations team to develop plans for schedule changes, staffing, and other production variables to account for changing production should a DO/DX rated order take precedence.

Now would also be a great time to remind those existing suppliers who have previously accepted orders under the PIs most likely to see activation noted above.

Most likely, the use of rated orders will be in the areas of critical supply production.  Areas like masks and other PPE or disinfectants for the near term are the most likely candidates; however, the Government may use DPAS to assist these key manufacturers with increasing capacity of production, which could extend to any number of other companies within their supply chain.  Remember, during WWII, many companies contributed to the war effort who were not previously “defense contractors.”

In these times, it is everyone’s patriotic duty to support the fight against this unseen enemy, but doing so should be done with understanding.  Remember, these orders may come directly from the Government, or they may come from another supplier via subcontracts to your company.  It is critically important to make sure that those tasked with accepting orders on behalf of your company are made aware so that as orders are accepted, you can take the necessary steps to comply with production scheduling requirements.

Some common acceptance questions that we see with DPAS are as follows:

In addition, we would encourage our readers to visit the FEMA website for a great overview of the DPAS Process:  https://www.fema.gov/information-contractors-about-priority-rated-orders.

We Want to Help

If you are a new contractor or existing client dealing with rapid decisions related to the pandemic response, we have established a rating system of our own. If you respond to the below questions and help link, we will be in touch ASAP and will provide a free consultation meeting on your situation free of charge.

During this time of increased work effort resulting from the DPA, Redstone GCI can assist contractors throughout the U.S. with understanding the Government’s expectations and requirements related to compliance with Government contracting terms and conditions and additional audit oversight.