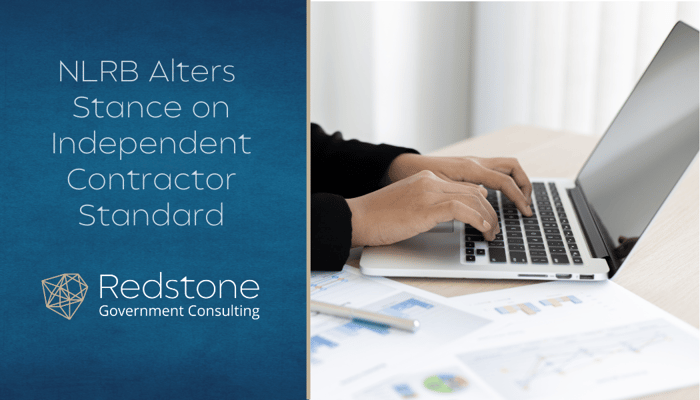 With its January 25th decision in SuperShuttle DFW Inc., the National Labor Relations Board (NLRB) altered its stance on the independent contractor standard. In a 3-1 vote, the NLRB amended its previous decision in FedEx Home Delivery (2014), asserting that a worker’s classification under the National Labor Relations Act (NLRA) should depend largely on the traditional common-law standard rather than economic factors.

The Common-Law Standard and Entrepreneurial Opportunity

While the 2014 decision considered these common-law principles, it put an increased focus on economic factors related to the working relationship and made independent contractor status more difficult to achieve.  The 2014 decision asserted that workers’ entrepreneurial opportunity - the measure of control a worker has in directing his/her loss or gain - should be a key factor in determining independent contractor status.

With its recent decision, the NLRB reverted to a more measured approach - noting that while economic dependency and entrepreneurial opportunity are important considerations, they should not overrule common-law factors. In SuperShuttle DFW Inc., the NLRB used this approach to analyze the working relationship between parent company SuperShuttle DFW and SuperShuttle’s drivers. Prior to 2005, the drivers were SuperShuttle DFW employees. They were paid an hourly wage, assigned scheduled shifts, and transported passengers in company-provided vans.

SuperShuttle DFW switched to a franchise model in 2005. Drivers now sign non-negotiable one-year Unit Franchise Agreements (UFAs) with SuperShuttle DFW. These UFAs establish the required fees, vehicle requirements, and conduct rules for franchisees. As part of the franchise agreement, franchisees pay an initial franchise fee, a flat weekly fee, and a decal fee for the right to use the SuperShuttle brand and its dispatch & reservation gadgetry. Passenger pay rates and the timing of passenger pickup windows are set by the parent company. Franchisees must wear parent company uniforms and provide receipts to passengers. Franchisees submit weekly receipts, trip sheets, and vouchers to SuperShuttle DFW and are reimbursed for fares collected.

Despite the control that SuperShuttle DFW has over its franchisee drivers, including the fact that drivers perform the core of the company’s work, the NLRB majority ruled that the franchisees are no longer employees upon reviewing the economic and common-law factors. Franchisees supply their own shuttle vans and are responsible for gas, maintenance, tolls, and related costs. Drivers have no set schedules and keep the money they earn. They have the power to accept or decline transport requests and can increase their earnings by soliciting transport service contracts with area hotels. Although they do have some responsibility to a parent company, franchisees are ultimately responsible for their own gain or loss. In the view of the NLRB majority, such responsibility--coupled with the application of the common-law standard--makes the drivers independent contractors rather than employees of SuperShuttle.

The NLRB’s decision affirms the importance of the common-law standard in determining whether workers should be classified as employees or independent contractors. However, employers should pay attention to state and local rulings regarding independent contractor tests, as these rulings may require different or additional considerations when it comes to classifying workers. For example, it is unlikely that state departments of unemployment compensation would arrive at the same result. Employers also need to be aware of the legal distinctions between employees and independent contractors. Payroll taxes, workers' compensation, discrimination, leave, and unemployment are all issues that are handled differently depending on a worker’s classification.

How Redstone GCI Can Help

RGCI has a team of Human Resource consultants to assist your organization with questions regarding the independent contractor standard. From human resources audits, development of polices and procedures, to compliance concerns, let us guide your team in managing your HR needs. We offer training and consulting packages for companies of all sizes. Reach out to us to help you with your HR needs.

Prior to joining Redstone Government Consulting, Inc., Kayla worked with elementary school students in the Nashville metro area. Her desire to help others led her to the legal field, where she worked as a paralegal assisting clients through the litigation process. In her current role as HR Administrator, Kayla blends her teaching experience, legal background, and can-do attitude to create the optimal experience for our staff and clients. Education Kayla holds a bachelor’s degree in education from Lakeland University.