What Foreign Contractors Need to Know When Contracting with the U.S. Government 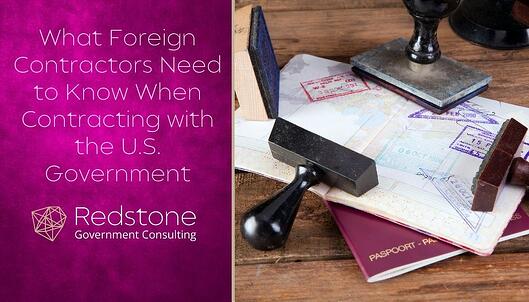 Non-U.S. contractors have many misconceptions as to what rules and regulations they must comply with under U.S. Government contracts. The two most common misunderstandings non-U.S. entities have are (1) their country laws trump U.S. laws and regulations, and (2) Federal Acquisition Regulations (FAR) rules on cost collection and allocations are less strenuous for non-U.S. contractors. These two misconceptions could not be further from the truth.

First, non-U.S contractors must realize that when they execute a U.S. Government contract, they are agreeing to abide by all U.S. rules and regulations applicable to that contract as set forth in Section I (Contract Clauses) of the contract.  Before they sign on the dotted line it is very important that non-U.S. contractors fully understand how those contract clauses will impact their operation and accounting infrastructure, as well as the financial risk associated with non-compliance. If those companies do not have the expertise within the company to ensure an understanding of and compliance with the rules and regulations contained in the contract and how to implement or amend existing systems that will meet government guidelines, it is often critical that they hire outside government contracting expertise to assist them. Often times, minimal expenditure for outside legal and professional counsel could save the non-U.S concern significant money down the road.

The adverse impact of the second misconception will depend on the type of contract entered into with the U.S. Government. If the contract is a competitively awarded contract, then the cost collection and allocation rules and regulations applicable to this type of contract is limited. However, this limitation only applies to the base contract, any subsequent contract changes or modifications to that base contract requiring disclosure of supporting cost data or invoicing of costs based on actual recorded costs, places the non-U.S. contractor under the cost collection and allocation requirements found in FAR Part 31 Contract Cost Principles and associated regulatory internal controls.

Non-U.S. contractors with negotiated contracts, both fixed priced and cost reimbursable, are subject to the cost accumulation and allocation requirements delineated in the FAR. This applies to both prime contracts and subcontracts. An example of one such requirement is the submission of certified cost or pricing data for any prime or subcontract over $700,000 during the pre-award bidding process. This requirement subjects the non-U.S. contractor to the rules of the Truth-In-Negotiations Act. The non-U.S. contractor’s compliance with the FAR for the accumulation and allocation of direct and indirect costs is key to its success as a U.S. Government contractor.

In addition to the requirements of the FAR, negotiated contracts give the Defense Contract Audit Agency (DCAA), or another U.S. procurement agency’s auditors, full audit rights which means full access to the contractor’s books and records. Typical audits are Pre-Award and Post-award accounting system audits, along with various business systems audits, such as an audit of the contractor’s cost accounting system. Failure to pass such audits could pose significant financial risk to the contractor and impair its ability to acquire future U.S. Government contracts.