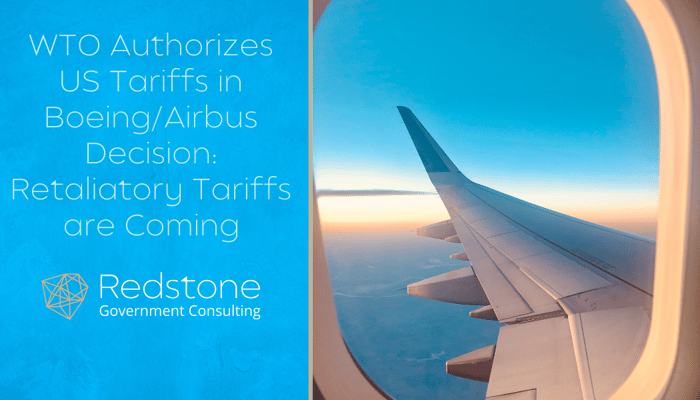 The World Trade Organization (WTO) issued an arbitration decision in European Communities and Certain Member States – Measures Affecting Trade in Large Civil Aircraft, WT/DS316/ARB. The decision authorized the United States to impose $7.5 billion in tariffs, beginning October 18th, 2019, on EU imports due to EU subsidies to Airbus, making the ruling the largest in the WTO’s history.

The Meaning Behind the WTO Decision

The rationale for the decision is that the EU and certain of its member states (France, Germany, Spain and the United Kingdom) provided improper subsidies to large civil aircraft produced by Airbus. The subsidies included preferential financing, loan forgiveness, and research and development grants.  Some of these qualified as export subsidies, a major breach of WTO requirements. The WTO Appellate Body confirmed that the subsidies had an adverse effect on U.S. trade interests by permitting Airbus to gain aircraft sales at the expense of its U.S. competitor, Boeing.

The US Trade Representative (USTR) announced that the Trump Administration plans to impose tariffs beginning October 18th, 2019. USTR stated that the bulk of these tariffs will be applied to imports from France, Germany, Spain, and the United Kingdom; however, the tariff increases will be limited to 10 percent on large civil aircraft and 25 percent on agricultural and other products. Under Section 301 of the Trade Act of 1974, the USTR has the discretion to impose tariffs on EU products for violations of the WTO trade rules, or USTR could use the arbitration decision as a starting point for further negotiations with the European Union. The European Union is awaiting a damage award in a WTO counter-complaint against the United States and Boeing where it has sought authorization to levy duties on $12 billion in US products.

A Variety of Products Are Covered by the Tariff

USTR has published two lists of EU products that could be the target of the duties that cover more than $20 billion in EU exports. The key EU exports that USTR will likely target include wine, whiskey, cheeses, motorcycles, aircraft parts, and certain helicopters. Additional listed products include seafood products, produce, certain clothing and textile products, glassware, and certain metal products and metal alloys.

US Importers of items that are not on the initial list shouldn’t rest too easily, given USTR’s statement that “The U.S. has the authority to increase the tariffs at any time, or change the products affected.” Increased import tariffs would harm exporting businesses and their customers in both America and Europe, and escalating tensions could unsettle markets in a time of growing economic uncertainty.

Following the decision, Airbus called on Washington and Brussels to avoid tariffs that would “severely impact” the aircraft industry, hurt U.S.-EU trade relations and damage the global economy. Duties would raise costs for airlines on both sides of the Atlantic and hit a U.S. supply chain employing 275,000 people and generating billions of dollars in revenue annually, the European plane maker said.

Thankfully, the Airbus Plant in Alabama has been tentatively spared fallout from U.S. tariffs. Alabama aerospace workers won an unexpected reprieve from escalating trade tensions on October 2nd when the U.S. spared the Airbus plant in Alabama from the impact of tariffs against the European plane maker - at least for now. However, Airbus aircraft built in Europe will be hit with a tariff of 10% after the WTO allowed Washington to impose sanctions on EU goods; semi-finished fuselages and wings are exempted, an official list showed. That means large parts shipped to the deep-sea Alabama port of Mobile from plants in Europe will not be hit by the duties, allowing Airbus to continue to supply U.S.-based airlines with a limited number of locally assembled aircraft.

This Boeing/Airbus litigation dates back to 2004 when the U.S. initiated WTO proceedings, arguing that EU subsidies to Airbus violated the WTO Agreement on Subsidies and Countervailing Measures and the 1994 General Agreement on Tariffs and Trade. In the years since, the WTO has ruled that the U.S. and EU both provided infringing subsidies. Each has made changes to comply with these rulings, but the WTO has found continued infringements. A decision on the EU case regarding US subsidies is expected in the coming months.

If you want to learn more about this topic or discuss how this ruling could impact your company, Redstone Government Consulting can help.