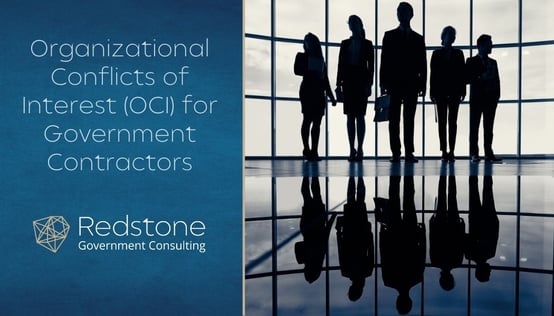 Organizational Conflicts of interest have increasingly gained attention from the Government and Government contractors.  Organizational Conflicts of Interest (OCI) are discussed in the Federal Acquisition Regulation (FAR) subpart 9.5.  OCI rules are meant to prevent conflicting roles or unfair competitive advantage in government contracting.  Assessment of OCI is very fact specific, and mitigations should be sculpted to fit your contracts and situation.

There are three primary categories for OCI: Unequal Access to Information, Biased Ground Rules, and Impaired Objectivity.  Based on the different types of tasks involved in each category, differing mitigation techniques are considered effective for each category.

Mitigation techniques such as firewalls are considered ineffective against bias-type OCIs.  However, there are exceptions to the bias-type OCI rules.  As indicated by the first example above, the restriction does not apply to development work.  Another exception applies if the contractor was providing the specifications of their own product in response to the government’s request. A number of other exceptions exists for bias-type OCI and should be reviewed for each potential bias-type OCI.

Impaired objectivity could occur if a company is in the position of evaluating its own performance or products, or the performance or products of a competitor.  This could also exist if the contractor is positioned to favor its own interests over the interests of the government.  Impaired objectivity OCIs can be hard to mitigate.  Typical firewalls are considered ineffective against impaired objectivity OCIs.  However, while a typical firewall is considered ineffective, a firewalled subcontractor, meaning a subcontractor that works directly with the government rather than through the prime (contractor), could equate to a potential mitigation.  Consequently, this technique is more administratively burdensome for the government.

Responsibilities with Regards to OCI

How Redstone Government Consulting Can Help

The team at Redstone Government Consulting is well versed in Organizational Conflicts of Interest and OCI mitigation plans.  Contact us to assess your potential conflict, develop mitigation plans, or develop internal policies to assist with monitoring OCIs.  Our team also frequently assists our client base with the development of response strategies in the event of perceived OCIs from competitors during acquisitions.

Kelli began her career at the Missile Defense Agency in 2006 in the Ground Based Mid‐Course Defense contracts office. There she negotiated contracts, worked contract terminations, claims, modifications, and any other contracting actions needed. Kelli also working in the MiDAESS office where she assisted with developing acquisition strategies, wrote requests for proposals, advised evaluation teams, assisted with preparing evaluation documentation, and prepared Agency position concerning OCI issues. In 2010, Kelli joined the Missile Defense Agency General Counsel’s Office. In that capacity, Kelli served as legal counsel on complex source selections to include multiple Targets procurements, as well as MiDAESS and TEAMS. She advised clients on all acquisition and contract matters to include interpretation of procurement related laws and regulations, acquisition strategy, data rights considerations, claims, terminations, and defending the Agency against legal challenges. She served as MDA’s Procurement Fraud attorney and Suspension and Debarment counsel. She assisted with forming and served on MDA’s OCI panel.