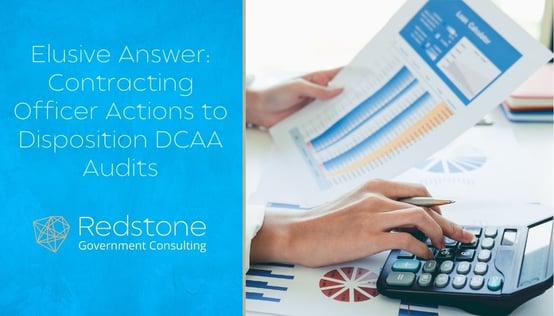 It seems like there are a lot of agencies being audited on what they are doing with DCAA audit findings.  In September, the DoD-IG announced an audit of 26 contracts issued from FY 2014-2017 by Navy, DLA, Army and Air Force contracting officers. It’s stated objective is “to determine whether contracting officer actions during contract negotiations complied with acquisition regulations when contractor proposals were deemed inadequate by the Defense Contract Audit Agency (DCAA).”  At the same time, they announced an audit of DCMA with an audit objective “to determine the appropriateness of contracting officer actions to resolve and disposition compensation costs that the Defense Contract Audit Agency (DCAA) has questioned in audits of DoD contractor incurred cost claims submitted to the Government.

These two audits follow the issuance of the Treasury Inspector General for Tax Administration (TIGTA) on March 15, 2017.  The objective of this audit is “to determine whether the IRS has an effective process in place to use the results of DCAA reports to resolve questioned costs.”  These audits are related to a question we frequently ponder here at Redstone: “Why are DCAA sustention rates so low?” Our speculation here has been that DCAA’s findings are not well supported, but if the DoD-IG reports have similar findings to the TIGTA report, we will never know the answer to this question because the contracting officer follow up actions were so lacking.

From fiscal years 2005 through 2014, the IRS paid nearly $5.7 million for DCAA audits (DCAA audits for civilian agencies are on a reimbursable basis because DCAA’s appropriated funding is from DoD).  The TIGTA reviewed 25 DCAA audit reports with questioned costs totaling more than $80 million.  The IRS Office of Procurement reported $1.4 million as recovered, but could only document about $545,000 in recoveries.  Recoveries are known in the DCAA world as “questioned cost sustained.”  Here is a summary of what happened based on the audit reports:

Other miscellaneous findings related to the IRS process for resolving DCAA audit results were:

So, it appears that the answer to the question as to whether DCAA audit findings are or are not well supported (thus sustainable) will remain elusive, buried in the morass of poor recording keeping and inadequate follow-up.  Maybe the DoD-IG’s future reports (on the two announced projects) will shed more light on our question…only time will tell.

The team at Redstone GCI are experienced in preparing for DCAA audits, and can help your team with information gathering, organizing responses, and preparing for the process. Additionally, we provide consulting and training to instruct you on incurred cost proposals, and provide a thorough education on government audits.

Cheryl Anderson is a Director with Redstone Government Consulting, Inc. She provides Government Contract Consulting services to our government contractors primarily related to equitable adjustment claims, terminations, and DCAA audit expectations. Prior to joining Redstone Government Consulting, Cheryl served in a number of capacities with DCAA for over thirty-five years. Upon her retirement, Cheryl was a regional audit manager with DCAA. Cheryl began her DCAA career in 1977 as an auditor-trainee with the Ingalls Resident Office in Pascagoula, Mississippi. After instructing at the Defense Contract Audit Institute for four years, she returned to the Eastern Region in 1990, holding various audit positions before ultimately becoming a Regional Audit Manager in August 2005. She had overall management responsibility for audits performed by approximately 200 employees. During Cheryl’s tenure with DCAA, she was involved in conducting or managing a variety of compliance audits, to include cost proposals incurred cost submissions, systems, Cost Accounting Standards, claims, defective pricing, financial capability and agreed-upon procedures. She directly supported the government litigation team on a contract dispute and has prepared and presented various lectures and seminars to DCAA staff. In addition, she has served as an instructor for the Government Audit Training Institute for over 20 years. She currently specializes in preparing clients for more complex DCAA audits, providing advice on FAR cost principles and contracts regulatory provisions, and assisting clients in anticipating and addressing audit. Education Cheryl has a BS Degree in Accounting from Auburn University at Montgomery and a Masters of Business Administration from Wichita State University. Cheryl also completed courses at OPM’s management and executive development centers and at the Federal Executive Institute and is a Georgia Certified Public Accountant.