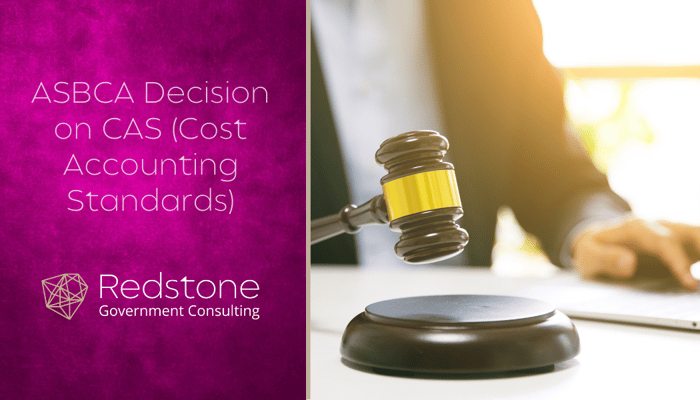 The judgments rendered by the ASBCA in the Raytheon Co., Space & Airborne Sys, ASBCA Nos. 57801, 57803, 58068 resulted in the resolution of a number of issues concerning CAS (Cost Accounting Standards) cost impacts associated with unilateral changes in a contractor’s cost accounting practices. There were five basic issues; the Government prevailed on three, the contractor prevailed on one, and one was undecided (to be decided in the actual trial given that the current decisions were in reference to the parties’ cross-motions for summary judgment).

The ASBCA also clarified its stance on FAR 30.606(a)(3)(ii), stating that as long as the changes in cost accounting practices took place before April 8, 2005, then the contractor is allowed to offset the impacts of simultaneous cost accounting practice changes. Unfortunately, those contracts/subcontracts that were executed after the deadline, allow for the Government to recover the increased costs for individual changes while not allowing any offsets for other unrelated changes which actually decrease costs to the Government. Apparently the ASBCA sees nothing wrong with a FAR administrative clause which effects a windfall to the Government, in part deferring to the OFPP Administrator who has the authority to rescind the FAR clause (The ASBCA noted that the OFPP Administrator has not done so in the ten years since FAR 30.606 was changed as if the OFPP Administrator is going to unilaterally rescind an administrative provision which might be viewed as inequitable to Government contractors).

The court addressed a number of other issues (desirable changes, interest, materiality) that will be discussed in our August newsletter, but the last that should be mentioned is that it failed to resolve DCAA’s “30% adder” to protect the taxpayer because DCAA had some success in its “blame game” strategy (blame the contractor for cost impact inadequacies). Fortunately, this issue will be re-addressed at trial and we can only hope that a full hearing will result in the rejection of the DCAA strategy to arbitrarily add to a cost impact.   If DCAA succeeds in this strategy, one can only imagine that DCAA will be encouraged to arbitrarily and speculatively add to any cost impact, any cost disallowance, etc., based on the nebulous concept of “protecting the taxpayer”.