Are You Paying Your Employees Correctly Under Your Federal Government Contracts? Government contractors are subject to many rules and regulations, and many contractors don’t always pay attention to the labor standards requirements incorporated into their contracts. Employers often worry about ensuring employees are properly being paid overtime and classified as exempt or non-exempt, but is your company really paying the appropriate pay rate and benefits that may be part of your contracts? Odds are if your company is performing services under a federally funded government contract, the Service Contract Labor Standards (SCLS), Davis Bacon Act (DBA), and/or Collective Bargaining Agreements (CBA) are likely part of your contracts.

SCLS (formerly The McNamara–O'Hara Service Contract Act of 1965 (SCA)), requires general contractors and subcontractors performing services on prime contracts in excess of $2,500 to pay service employees in various classes no less than the wage rates and fringe benefits found prevailing in the locality as determined by the U.S. Department of Labor (DOL), or the rates contained in a predecessor contractor's collective bargaining agreement. This is also known as the prevailing wage. The agency responsible for collecting and disseminating the prevailing wage data is the Wage and Hour Division (WHD) of DOL.

The Davis–Bacon Act of 1931 is a U.S. federal law which established the requirement for paying the local prevailing wages on public works projects for laborers and mechanics. It applies to contractors and subcontractors performing on federally funded or assisted contracts in excess of $2,000 for construction, alteration, or repair (including painting and decorating) of public buildings or public works.

Employers must maintain accurate records regarding hours worked and bona fide benefits provided to employees, such as medical, dental, vison and vacation or their cash equivalents. DBA does not require that health and welfare be separated from pay rate.

How to Determine Which Employees are Subject to SCA and DBA

Part-time, full-time, temporary and independent contractors are all subject to SCA and DBA requirements. It is the contractor’s responsibility to properly map contract labor categories to the appropriate labor classification in the respective contract wage determination (WD). DBA employees are paid based work performed (i.e. painting, plumbing, etc.). Contractors should do the following to ensure they have determined employees are properly categorized:

Contractors who violate the SCA and DBA are required to make aggrieved employees “whole,” which can include back payments for unpaid (or underpaid) wages and fringe benefits. Other possible penalties include:

SCA and DBA can apply to the same contract and labor descriptions may be similar. SCA work is typically defined as something that is routine or regular maintenance. Examples include: custodial service, HVAC routine maintenance, and snow removal. DBA work is typically a one-time repair; something is broken, construction, restoration, alteration or replacement. Examples include: structural repair of buildings, remodeling, road work, or painting. 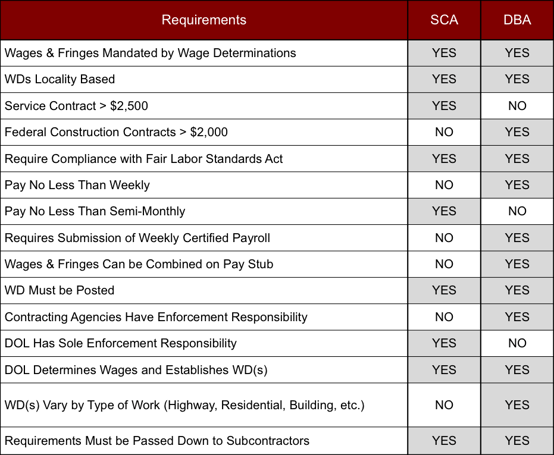 Recent Changes that Contractors Should Review

Contractors should also take note that in May 2016, the DOL changed the minimum salary for an employee to be considered “exempt” to $913 per week, starting on December 1, 2016, which equates to $47,476 per year for a full-time worker. That’s a little more than double the current amount. Anyone who earns less than $913 per week will no longer qualify for the Executive, Administrative or Professional exemption starting December. DOL estimates that 5 million workers will be affected acts.  Additionally, under the so-called Fair Pay and Safe Workplace Executive Order (13373), contractors who violate the SCA or DBA could be required to disclose those violations when bidding on Government solicitations (note: this EO is currently under legal challenge in Federal District Court in Texas).