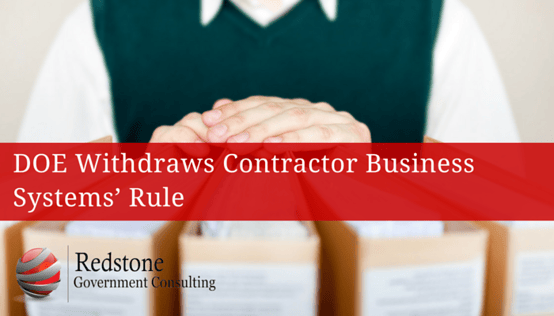 On July 6, 2016, the DOE (Department of Energy) quietly withdrew its April 1, 2014 proposed rule, “Contractor Business Systems—Definition and Administration. The April 2014 proposed rule which defined five business systems was modeled after similar business systems requirements imposed upon DOD Contractors (DFARS 252.242-7005 along with six interrelated regulations pertaining to each of the six business systems noting that the five DOE systems excluded MMAS). Also in common with DOD, the statement or mantra, that “Contractor business systems and internal controls are the first line in defense against fraud, waste and abuse. That statement was excessively used by the Commission on Wartime Contracting, a Bi-Partisan Commission whose August 2011 248-page report concluded that at least $31 billion and possibly as much as $60 billion was wasted in Iraq & Afghanistan from 2002-2008 ($4.4B to $8.6B annually; by comparison, Government agencies estimate annual improper payments exceeding $100 billion in each year 2009-2015).   If one bothers to read the 248-page report, one would also surmise that most of the waste resulted from government failures which notably includes one singular failure, the lack of any accountability for $6.6B of a $9.1B cash shipment.

By any measure, the April 2014 proposed rule was an important (future) regulation designed to motivate DOE contractors to maintain compliant business systems, thereby establishing the front-line of defense against fraud, waste and abuse.  Fast-forward to July 6, 2016 when the once “flashy” requirement was quietly withdrawn with absolutely no stated reasons for inexplicably (by implication) leaving DOE without a front-line defense against contractor fraud, waste and abuse.

In the absence of a stated reason (or reasons) for this unexpected turn-of-events, we have performed exhaustive research in an attempt to identify the unstated reasons for DOE’s July 6, 2016 action. In the creative and somewhat whimsical opinion of Redstone Government Consulting, we’ve listed the top five (somewhat speculative) reasons which all have a common theme: (in reference to government acquisition):