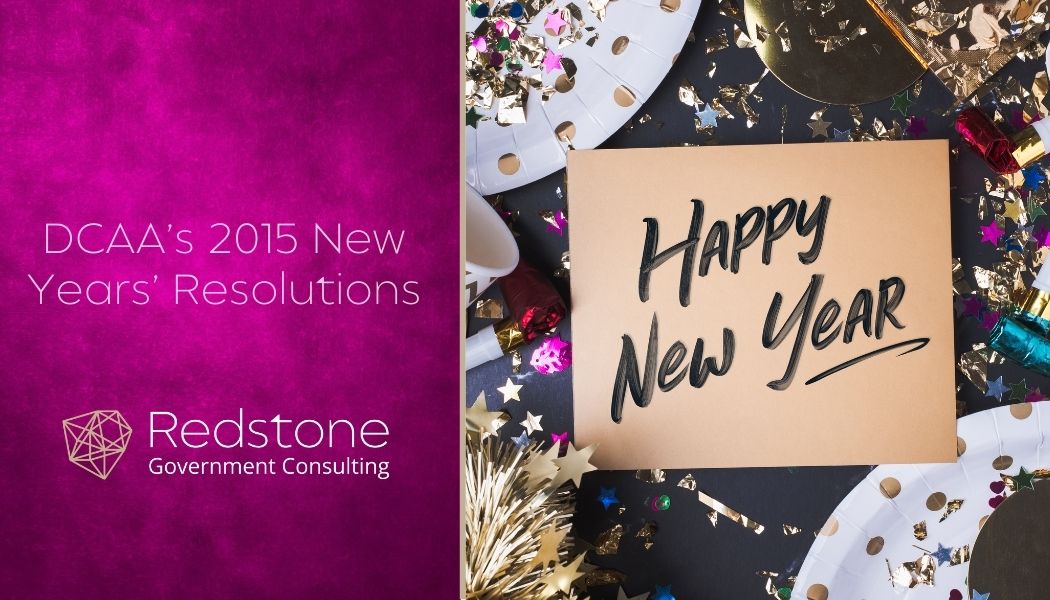 Although it may come as a surprise to many, DCAA (Defense Contract Audit Agency) has embraced the concept of New Years’ Resolutions, in this case to restate and to reinforce strategic goals in terms of near term objectives.  It should be recognized that DCAA’s New Year actually began on October 1, 2014; however, DCAA is only now managing to complete its new years’ resolutions which is coincidentally reinforcing the need for resolution #1.

#1 Reconsider the need for budgets and due dates

As some may recall, DCAA scrapped budgets and dues dates in late 2008 in the wake of the GAO reports which asserted that DCAA audits failed to comply with government auditing standards (GAGAS).  At the time a number of very outspoken DCAA field auditors gained fame by their unsupported assertions that, but for due dates and budgets, they could have saved taxpayers billions by detecting contractor misdeeds (i.e. unallowable costs).  Even though the GAO is supposed to rely on documented evidence, the GAO inexplicably took these DCAA auditor assertions at face-value and the rest is history (out-of-control, endless and untimely DCAA audits which led to an ever increasing backlog of unaudited contractor indirect cost rate proposals).  If DCAA can’t successfully reinstitute due dates and budgets, DCAA’s fallback resolution is for Congress to eliminate any regulation which places any time limit on any government action to retroactively recoup costs from government contractors (i.e. elimination of the six year statute of limitations in FAR 33.206(b)).  At least for now, DCAA is stuck with the reality of reconsidering due dates and budgets and to the extent DCAA imposes due dates and budgets on its auditors, those auditors will be imposing extremely tight turn-around times for contractors to provide data and/or to respond to audit exceptions.  As with everything else, DCAA auditors are more than happy to convert their “hardship” into more aggressive demands from contractors.

As stated in DCAA’s 2012 and 2013 Annual Reports to Congress, DCAA continues with its resolution and belief that it must have unfettered access to contractor records (online access to all accounting and purchasing data and all policies and procedures) and similar access to contractor employees including those employees interviewed in 2015 to explain what that employee was working on in 2008 (a year being audited by DCAA…as if the employee can be expected to remember).   It matters not that even without this unfettered access DCAA had effectively audited since 1965 (at least until late 2008 when the auditors became self-supervising) and that all other forms of auditing rely almost exclusively on records (documents, not people) provided by the auditee during the audit.  Perhaps DCAA believes in the theory of “third time is a charm” in which case we can be assured that DCAA’s 2014 Annual Report to Congress will include the same wish for unfettered access….

Although this resolution may seem counter-intuitive, DCAA’s view of auditor independence extends into its belief that auditors should be free to interpret cost principles in a manner which yields the maximum amount of exceptions (cost questioned).  If cost principles were void of all objective criteria, DCAA auditors would be free to maximize audit exceptions by simply creating audit criteria which disallows any cost audited by DCAA. But for those pesky FAR clauses which inconveniently include objective criteria, DCAA would be free to question costs at will consistent with its unofficial mantra of “we prefer to believe what we prefer to be true”.

As DCAA has become totally engrossed with redundant levels of internal reviews including non-value added reviews by those who have little or no real-life audit experience, DCAA has experienced a significant loss of highly competent auditors to sister agencies (i.e. DCMA).  This dilemma is also confirmed by the fact that the percentage of DCAA auditors who are CPAs has dropped dramatically from 2008 to 2014.   Thus DCAA has resolved to seek legislative action which would make it illegal for DCAA employees to leave.  Although one would think that DCAA would prefer that its unqualified auditors would depart, DCAA no longer has any metrics or any other means to determine which auditors are unqualified.   Hence, the basis for DCAA’s other unofficial mantra, “we have met the enemy and he might be us”.