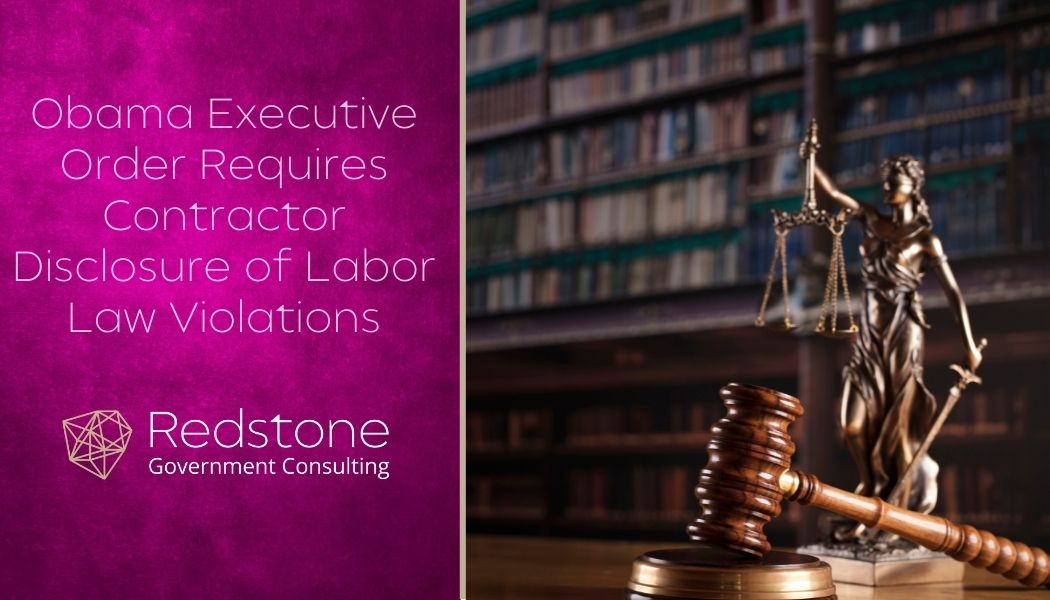 President Obama signed another executive order July 31 2014 which will mandate contractors to disclose prior violations of federal labor laws, the superficial purpose of which is to enable federal procurement process to protect contractor workers and improve integrity of selection of contractors for future awards.

The order requires contractors who bid on contracts with potential awards of $500,000 or more to disclose company labor law violations during the preceding three years.  If the procurement commands deem those violations significant, contracting offices may use that history in determining if such offenders should receive future awards.  The purpose of the order is to essentially punish serious violators by potentially eliminating them from contract award considerations, notwithstanding a contractor’s superior past performance in delivering contract objectives and effectively managing the costs of performance.

The new executive order is yet another labor regulatory constraint and administrative burden on government contractors which is purely politically motivated, a punitive method of portraying Republican lawmakers as a do-nothing band of buffoons insensitive to the American working family resulting from GOP initiatives to litigate the constitutionality of other executive orders.

The order will, according to some observers, unfairly disqualify competitive bidders, drive up the costs of contracts, and reduce competition.  Most importantly, the on-going barrage of White House executive orders which continue to tighten the flexibility of contractors in managing their personnel will motivate many contractors to abandon contracting with the government.  As newly created unilateral and un-checked executive orders continue to be issued, contractors subject to those orders must wonder if the catalyst behind these orders is to force jobs currently held by the private sector (contractors) to the federal employment ranks given Obama’s public and transparent mistrust of not only government contractors, but also the procurement process as a whole.

Obama administration officials (enabled by the CBS News network), however, present this order as a much-needed step in protecting contractor employees by ensuring that “employees are not preyed upon” by contractor owners and managers.  A more absurd assertion from the administration is that the President’s edict actually “improves the economic efficiency of our federal contracting process” and will “help the best contractors actually continue to be competitive”.  Really?  Layers of regulations and reporting requirements actually achieve contractor efficiency?

The labor unions are filled with glee over the executive order.  The Service Employees International Union (SEIU) President stated that the order is necessary to insulate responsible contractors from competition by unethical ones “who profit from their violations of the labor and employment laws.”  The President of the SEIU went on to state “our economy won’t work for everyone if taxpayer dollars flow to companies that steal wages or create unsafe conditions for their workers”.   Employee labor unions have traditionally supported draconian oversight of government contractors with the belief that contractors make too much money, treat their employees unfairly, and overcharge the American taxpayers.