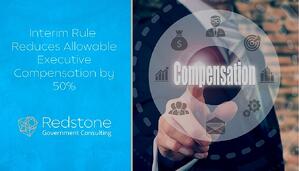 As required by Section 702 of the 2014 Bipartisan Budget Act (BBA) signed by President Obama on December 26, 2013, the June 24, 2014 Federal Register includes an interim rule setting the FAR 31.205-6(p) executive compensation statutory cap at $487K (coincidentally a 49% reduction from the most recent statutory cap of $952,308).   The June 2014 rule notes that it also implements a possible “narrowly targeted” exception to this cost limit for scientists, engineers or other specialists upon an agency determination that such exceptions are needed to ensure that the executive agency has continued access to needed skills and capabilities.  The interim rule also includes a comment period which is for 60 days after the Federal Register publication date (June 24 to August 23, 2014).

The 2014 BBA and the June 2014 Interim Rule include an effective date of June 24, 2014; hence, the lower cap will only apply to the costs for all contractor and subcontractor employees for contracts awarded, and costs incurred on or after June 24, 2014.  Although this applicability date is implicitly based upon fundamental and long-standing legal interpretations that a government contract is subject to the FAR provisions in effect on the date of contract execution, the 2014 BBA is a departure from the 2012 NDAA (National Defense Authorization Act) which contained a retroactive revision to the applicability of the compensation cap to a broader category of employees for DOD, NASA and Coast Guard contracts (i.e. expanding the application to all employees and not just the five most highly compensated).  It should be noted that the 2014 BBA applies to “all contractor and subcontractor employees”; hence, the “top five” limitation no longer applies to any government contract containing FAR 31.205-6(p) after June 24, 2014.

In terms of how to implement the new $487,000 cap, it will only apply once a contractor receives a government contract (or subcontract under a covered prime contract) after June 24, 2014 and only that contract and subsequent contracts will be subject to the $487,000 cap.  If one believes the GAO (based upon a GAO report in 2013), the lower cap will only apply to .4% of contractor employees and it will have minimal if any impact on small businesses.  The Federal Register interim rule noted that “most contracts awarded to small entities are awarded on a fixed-price basis, and do not require application of the cost principle contained in this rule”.  Apparently the author of this statement (The FAR Council) is incorrectly assuming that all fixed price contracts are exempt from cost or pricing data (FAR Par 15); ignoring the fact that fixed price contracts subject to FAR Part 15 must be priced consistent with the cost principles in FAR Part 31.   Although the FAR Council maybe off-base in terms of its statement, the fact is that the only significance of the $487,000 cap is for those government contractors who have one or more employees who exceed this lower cap.  For those contractors who are actually impacted by this cap, they will be facing a Fiscal Year 2014 which has multiple indirect or G&A rates (assuming compensation exceeding $487,000) applies to employees who are indirect or more likely G&A.  Contracts executed after June 24, 2014 will be subject to slightly lower rates by virtue of the lower cap; conversely, contracts executed on or before June 23, 2014 will be subject to the $952,308 cap.

Regarding the definition of employee compensation subject to the cap, the 2014 BBA did not change the existing definition (FAR 31.205-(p)(2) which includes the total amount of wages, salary, bonuses, deferred compensation and employer contributions to a defined contribution pension plan.

A parting comment with respect to the 60 day comment period, don’t bother other than perhaps to point out that the cost principle can apply in pricing fixed price contracts. Otherwise the $487,000 cap “is what it is”.