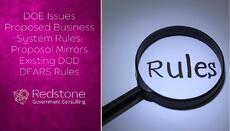 The Department of Energy (DOE) has released its proposed amendments to the Department of Energy Acquisition Regulations (DEAR) which would subject certain DOE contracts to business systems criteria and penalties for failure to maintain adequate internal controls governing those systems.  The proposed rule, published on April 1 2014, makes official a DOE FY 2013 promise of implementing formal regulations which would mirror systems requirements already in place for DOD contracts, those systems of which are defined in DFARS 252.242-7005.

In its introductory verbiage, the proposed rule supports the need for a more rigid contactor business system regulatory process given that “weak control systems increase the risk of unallowable and unreasonable costs” that would be charged to the government.

Unlike the DFARS business system regulations, the proposed DOE would implement systems criteria for only five sets of systems, as opposed to six systems addressed in the DOD guidelines.  The DOE proposal would require contractors to maintain adequate systems for property management, accounting system administration, estimating, Earned Value Management (EVMS), and purchasing practices.  The proposed rule does not include regulatory parameters for a material management and accounting system, the “sixth system” which is addressed within the DFARS business systems regulations.

Implemented rules would generally apply only to contracts which exceed $50 million awarded to large businesses.  Where contracts covered by the rules are reimbursable, Time and Material, Labor Hour, incentive type or subject to performance based payments,   DOE would be able to withhold interim invoiced amounts when significant systems deficiencies are found until satisfactory corrective action is completed by the contractor.  Exempt from the proposed business systems criteria at this point are Management and Operating contracts, which will be covered under a separate rule.

Certain verbiage included within the April 1 proposed rule may require future clarification, specifically as to contracts covered or affected by the business systems rules, going beyond the $50 million award to large businesses general criteria.  For example, within the Background section, the dialogue states that the business system rules would apply to “designated fixed price contracts awarded to a large business on the basis of adequate price competition without submission of cost or pricing data”, and “covered” contracts subject to the Cost Accounting Standards (CAS).  Similar to the DFARS business system final rules, the DOE may intend that only CAS covered contracts be subject to a “withholding” provision of the new rules; however, public comments and later changes that filter into a final rule will likely clarify the contracts that are affected by the new rules when implemented, and to which contracts a payment withholding may be executed.