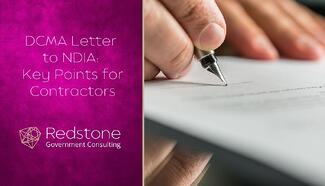 On September 5th, DCMA issued a letter to the National Defense Industrial Association (NDIA) addressing industry concerns raised at a meeting with DCMA on April 25, 2013.  We will highlight some key points in the letter that will help contractors deal with DCAA’s assertions which often times are not supported by regulations. The letter reinforces that it is DCMA that determines if a contractor’s business system is compliant or not and if a Corrective Action Request (CARs) is necessary.

The first area covered involved voluntary disclosure and corrective actions taken by the contractor.  DCMA stated the following: “We recognize that if contractors self-identify non-compliances and take timely and appropriate actions to correct the non-compliances, DCMA CARs are normally not needed. In our view, that should be the ultimate goal”.

The second area covered subcontractor management by prime contractors.  DCMA stated that it seeks to operate in the most effective and efficient manner within the rules of the FAR and DFARS; therefore it agrees with industry that issuing CARs directly to subcontractors and not through the prime is the most expedient method for address subcontractor compliance issues. Therefore DCMA will revise the Corrective Action Process Instructions to include:

Another very important statement coming from this letter involves the Contractor Business Systems (CBS).  DCMA makes it very clear in this letter that only the CO can formally approve/disapprove a CBS.  The statement reads as follows – “A CBS can only be formally approved/disapproved by the Contracting Officer at the prime contractor level”. This is important because DCAA has been known to call contractors COs/ACOs and tell them that they cannot award a follow-on or new award to the contractor because DCAA has determined that the contractor’s CBS is inadequate – Disapproved.

DCMA also stated in this letter that when reviewing a prime’s CBS, if DCMA determines that data generated by a subcontractor’s system is adversely impacting the prime, DCMA will make the prime aware of the deficiencies found at the subcontractor.  What this means is that DCMA expects the prime to address the issues with the subcontractor.

If you would like a copy of the DCMA letter reference here, contact Redstone Government Consulting and a copy will be forwarded to you.